This is what happens when politics and rap collides. We’ve seen it first hand. We’ve watched Barack Obama receive innumerable hands of support during his 2008 campaign. From Jay Z to Diddy, Barack was approved by every big name in the industry. Now, with his term ready to conclude in 2016, hip hop appears to be leaning on a new man to lead the way.

“I’m not here to talk about benevolent politicians that are going to come and save the day for you,” he said. “I’m not here to talk about a dream that we think is unattainable so we settle for less. I’m not here to talk about a Utopian society where everyone is forgiven and no one has to pay for past debts… I have no time in my short 40 years on this earth to relive the Reagan years. I have no desire to see us elect our own Margaret Thatcher. I am here as a proponent of a political revolution that says healthcare is a right of every single person. I’m here because working class and poor people deserve a chance at economic freedom, and if you work 40 hours a week, you should not be in poverty.” 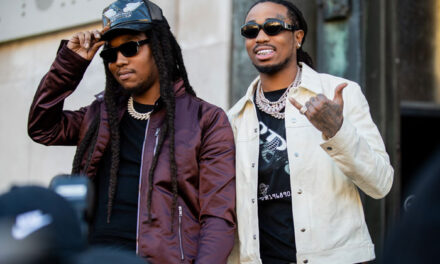 Did Lala Cheat On Carmelo Anthony?

Is L.A. The Most Dangerous City For Rappers